“He’s All That” protagonist Padgett Sawyer (played by Addison Rae) wears a long red dress to the prom in a nod to the iconic red dress worn by Laney Boggs (Rachael Leigh Cook) in “She’s All That.”

“He’s All That” is a gender-swapped Netflix remake of the popular 1999 movie “She’s All That” where popular high schooler Zack Siler (Freddie Prinze Jr.) gave less popular classmate Laney Boggs a makeover to win a bet.

In the 2021 Netflix remake, Padgett makes a similar bet with her friends to transform Cameron Kweller (Tanner Buchanan) into Prom King, with plenty of nods to the original version.

One of the most striking similarities between the two movies comes when Padgett wears a red prom dress. Laney wore a similar red dress when her full makeover is revealed to Zack for the first time, although the ’90s version of the dress was shorter.

To make this particular parallel between the two movies even more obvious, both Laney and Padgett wear their respective red dresses as “Kiss Me” by Sixpence None The Richer plays in the background.

Cook told Entertainment Tonight’s Lauren Zima earlier in August that she didn’t hold onto the red dress after she wrapped filming “She’s All That” in 1999 and isn’t sure what happened to the outfit afterward.

“I’m not a costume expert, but… I think it was mostly [nylon] and polyester, so it’s probably disintegrated by this point,” she told Zima.

Cook stars in “He’s All That” as Padgett’s mother.

Cook makes a few quick yet memorable appearances in “He’s All That” as Padgett’s nurse mother, Mrs. Sawyer.

Most memorably, just as “Kiss Me” starts playing at prom in the remake, Mrs. Sawyer, who is one of the chaperones says: “Why do I know this song?”

Cook told Refinery29, in an interview published on Wednesday, that she wanted to be “supportive” of the remake in “a very forward-facing way.”

She said: “Instead of being asked for the rest of my life, ‘How do I feel about this movie?’ I’d rather just simply put my stamp of approval on it by showing up.”

Cook isn’t the only actor from the 1999 movie who makes an appearance in “He’s All That.” Matthew Lillard makes a memorable cameo as well.

Lillard played the fame-hungry Brock Hudson in “She’s All That.” He’s obnoxious and steals Zack’s girlfriend Taylor Vaughn (Jodi Lyn O’Keefe) within the first 10 minutes of the movie.

The “Scooby-Doo” actor is back as the principal of the school that Padgett and Cameron attend in “He’s All That.”

At the end of the Netflix remake, Lillard breaks into a dance at the school prom in a nostalgic recreation of his “Give It To Me Baby” dance from “She’s All That.”

As Brock Hudson danced to “Give It To Me Baby” in 1999, his onscreen girlfriend Taylor (and everyone else in the room) watched with a horrified look on their face.

Lillard gets to redeem himself in “He’s All That.” His dance is better received this time around by his onscreen students and the teens cheer him on as he dances to a remix version of “Kiss Me.”

While his awkward dancing might have given “She’s All That” viewers second-hand embarrassment in 1999, Lillard told CinemaBlend he still gets recognized for the scene two decades later.

“But it’s humbling right?” the “Scream” actor told the publication. “You look at your expanse of your career and here’s this moment that people still remember all this time later and call out. It gives you a sense of pride and that you’ve made it this far.”

Lillard isn’t the only one dancing. “He’s All That” features an intense dance-off at the prom between Padgett and her rival Alden (Madison Pettis) similar to the “She’s All That” dance-off featuring Taylor.

Unlike the 1999 version, the dance-off in the 2021 movie might not have Usher playing DJ, but it does give a quick look at Addison Rae’s TikTok-famous dance moves.

Padgett’s ex-boyfriend, Jordan, is obsessed with having cameras document his every move – a lot like Brock.

Both Brock and Jordan Van Draanen (Peyton Meyer) are introduced in the two movies as obsessed with becoming famous and more obnoxious than talented.

Cameron, who is the Laney of “He’s All That,” drives a pickup truck like Laney’s dad in “She’s All That.”

Cameron’s pickup truck, like Laney’s dad’s truck, doesn’t make too many appearances but quickly makes the point that Cameron is not like his classmates who are spotted driving posh convertibles.

Pool parties spell romantic disaster for the popular leads in the two movies. Fortunately, it’s short-lived for both Padgett and Zack.

At the beginning of “She’s All That,” Zack is supposedly dating the popular and beautiful Taylor. Unfortunately, he later finds out that she’s dumping him for Brock, whom she met at a pool party.

Similarly, the popstar-wannabe Jordan cheats on Padgett with a backup singer from his new music video. Their messy breakup, which is captured on TikTok live, becomes messier when Jordan brings his new girlfriend to a pool party thrown by Padgett’s best friend.

While Zack gets over Taylour by giving Laney a makeover and ultimately dates her, Cameron comes to Padgett’s rescue at the pool party in the Netflix remake and saves her from public embarrassment.

The pool party in the 2021 movie, like the one in the 1999 version, is decorated with elaborate balloon arches and plenty of floaties.

Padgett’s bedroom is noticeably more fancy than the rest of the house, possibly because it’s the only room all her followers see in her videos.

Padgett, like most social-media influencers, has a well-curated online presence. The teen frequently shares beauty tutorials, musical performances, and other tidbits from her daily life.

But, she’s also lying about being richer than she is — both to her hundreds of thousands of followers and her friends.

That is possibly why her room is more well-decorated than the rest of her house because her bedroom is in the background of many of her videos.

Padgett’s wardrobe, like her room, is almost entirely pink. The only time she’s not wearing pink is when she wears the red prom dress.

Padgett wears various shades of pink throughout “He’s All That” — even when she’s taking riding lessons with Cameron.

During one of her beauty live streams, Padgett touts products from Bunny Venom, one of the brands sponsoring her, but a quick trip to her bathroom (away from the cameras) shows that she doesn’t actually use any of their products in her daily life.

Bunny Venom is owned in “He’s All That” by Jessica Miles Torres, who is played by Rae’s real-life best friend, Kourtney Kardashian.

Rae told E! News on Monday that it was “incredible” having Kardashian film “He’s All That” with her. (The two aren’t actually physically present in the same frame at any point in the movie and are just seen speaking over the phone.)

“Kourtney is amazing. She really did her part and studying her lines,” Rae said about her reality star best friend. “She was nervous too, and so was I, but we worked together, read our lines together as much as we could and she went in there and did her thing and I’m so proud of her.”

After Padgett elbows her way into a riding lesson with Cameron to get close to him, he tells her that one of the horses likes and trusts her. Later in the movie, Padgett is seen riding that same horse.

Cameron (who has a part-time job working at the stables) also brings the same horse, Gilly, to meet Padgett at the school prom in the final scene.

Padgett’s cheating ex-boyfriend wears a #TeamAniston tank top to the pool party in honor of his new girlfriend, Aniston. It’s also a subtle nod to the 2005 feud between Jennifer Aniston along with Brad Pitt and Angelina Jolie.

Aniston (Vanessa Dubasso) says in her introductory scene that “it’s a family name,” possibly hinting that she’s related to the “Friends” actress.

Like Jordan and Aniston in “He’s All That,” the now-divorced Pitt and Jolie are also rumored to have met on the set of “Mrs. and Mrs. Smith” sometime in 2003 and 2004, while Pitt was still married to Aniston.

Team Aniston T-shirts became very popular around the time of Pitt and Aniston’s divorce in 2005 to show solidarity with Aniston over Jolie in the rumored love-triangle.

Read the original article on Insider

Tue Aug 31 , 2021
Scroll To See More Images We don’t need an excuse to celebrate South Asian fashion, beauty, accessories, jewelry and even stationery. You can’t put a dollar figure on how much South Asians influence these global industries—it’s invaluable. And for women like me, it is powerful to see representation by people […] 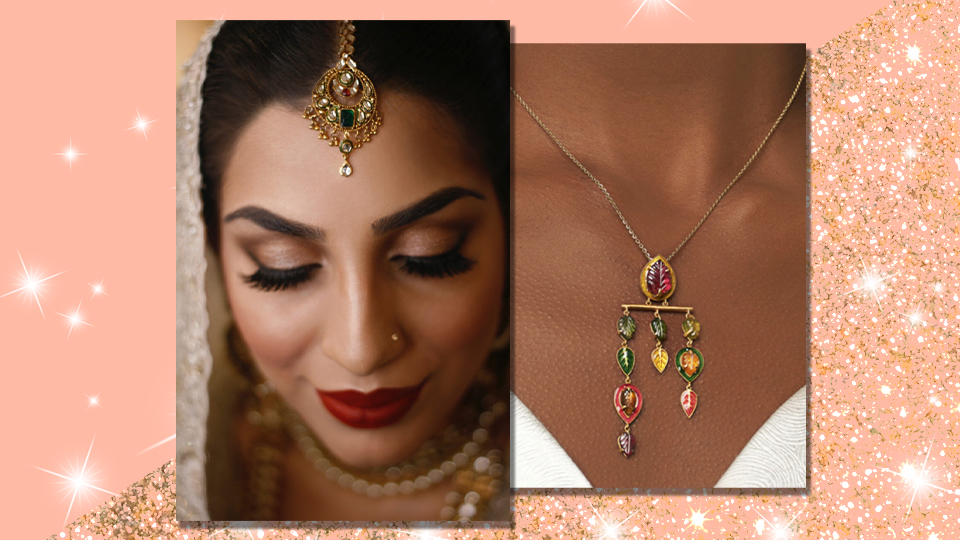